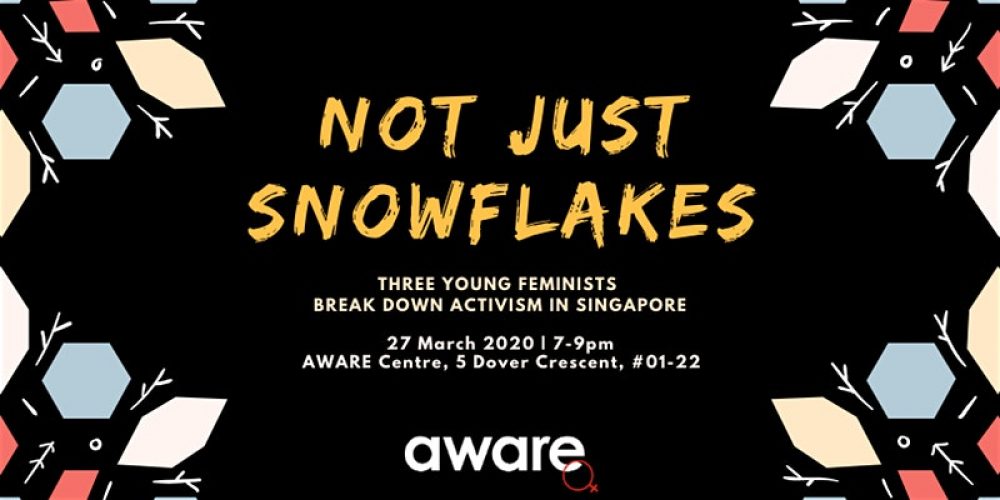 “Am I a keyboard warrior?”

“What do I have to do to be considered a legit activist?”

“What platforms do I have and how can I use them for advocacy?”

The past year was fraught with environmental, social and political change around the world. Issues such as sexual voyeurism, climate change, “dissident” education and POFMA have made headlines in our local news. Nevertheless, young people have been taking matters into their own hands, passionately speaking up about injustice in the hope of righting the wrongs of previous generations. Young activists are more important now than ever before.

In Singapore, where typical activist activities such as protests and public criticism can be considered illegal, it may be intimidating getting involved in civil society. But we can help you get started.

This International Women’s Day, join us for an honest conversation with three young feminists doing activism work. Whether through storytelling, community building, or art and writing, these women challenge conventional notions of what activism looks like. Spend the evening in invigorating conversation about what it means to be an activist in Singapore.

Reetz (she/her) is the founder of Your Head Lah!, a mental health collective that aims to amplify marginalised voices in Singapore. A firm believer in the power of storytelling, she sees community and collective healing as central to liberation work. In the past, she has worked in a range of social justice issues, including providing support to survivors of sexual violence, doing crisis counselling, as well as disability justice and anti-racist campaigning. She sees herself as a chapalang activist because isn’t all oppression connected? Her hobbies include dancing to Beyoncé songs in her undies, crying at photos of dogs, and trying to find more ways to love the people she loves.

Filzah Sumartono (she/her) currently works at The Association of Women for Action and Research (AWARE). She is co-editor of the books Perempuan: Muslim Women in Singapore Speak Out and Growing Up Perempuan which is an anthology of essays and poems written by women about their lived experiences. She is also a strong advocate against the practice of female genital cutting (FGC) and has been featured in Reuters.

Aarti Olivia Dubey (she/her) is a former psychotherapist turned activist. She advocates for human rights – fat body positivity, disability justice, lgbtq rights and advocates the importance of mental health care. As someone who struggled with eating disorders, depression and anxiety most of her life, she hopes to educate with her expertise and personal experiences. Aarti is an ardent animal lover who enjoys being a homebody around her husband and pets. She doesn’t take herself too seriously and spends her free time watching Tik Tok videos, meditating or being in the pool.